2013 marked the 125 anniversary of the publishing of H.P. Blavatsky’s The Secret Doctrine. Issued in 1888, it has remained in print ever since. The Theosophist, the journal founded by Mme. Blavatsky and still published monthly from Adyar, India, has been commemorating The Secret Doctrine throughout the year with a special article each month lauding the book’s greatness and exemplary philosophy. The series concludes in the December issue with Michael Gomes’ “The Secret Doctrine: Book of Books,” which takes a bibliographic view of the subject. The article looks at the extensive literature that has grown up about the book—editions, commentaries, commemorative publications, abridgements, translations, and bibliographies—estimated to be over 50. His takeaway is 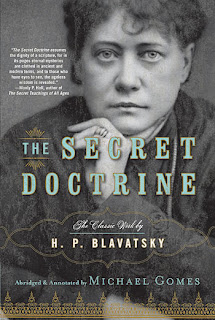 The idea of seeing the universe as an organic whole is much more common today than when The Secret Doctrine was published, and the scientific worldview has come closer to it, as can be seen in a recent book, Journey of the Universe, which charts contemporary findings of science about the development of the cosmos and which reads like a commentary on Mme Blavatsky’s book. The impact of these ideas can affect us on a deeper level and translate as a beneficent force in our daily lives.

Journey of the Universe by Brian Thomas Swimme and Mary Evelyn Tucker was published by Yale University Press in the USA in 2011. Gomes is the author of a number of Secret Doctrine studies, including an abridgement of the book published by Penguin in 2009, and editor of Blavatsky’s commentaries on the book, The Secret Doctrine Commentaries, published in The Hague, the Netherlands, in 2010, which the publisher has now put online here. His description of how the book was written, commemorating the centenary of The Secret Doctrine, was published in the May 1988 issue of The Theosophist and elsewhere, and can be read here.

Blavatsky, Buddhism and the Movies


The representation of Buddhism in movies is the subject of Ronald Green’s book Buddhism Goes to the Movies: Introduction to Buddhist Thought and Practice recently published by Routledge. Different aspects of Buddhism are illustrated through the content of the movies chosen. The book also supplies a selected list of films with Buddhist content. Helena Blavatsky is acknowledged as a source of influence in the chapter that deals with the 1919 silent film Broken Blossoms and Lost Horizon, 1937.

Lost Horizon, adapted from James Hilton's best-selling 1933 novel by that name, centers around Shangri-la, likely a literary adaptation of the mythical kingdom of Shambhala in Tibetan Buddhism. Madame Blavatsky of the Theosophical Society had earlier claimed that her undisclosed Tibetan Lama teacher had shown here the secret location of Shambhala. Similar to It’s a Wonderful Life [also produced by Frank Capra], Lost Horizon is about the search for what is really important in life. 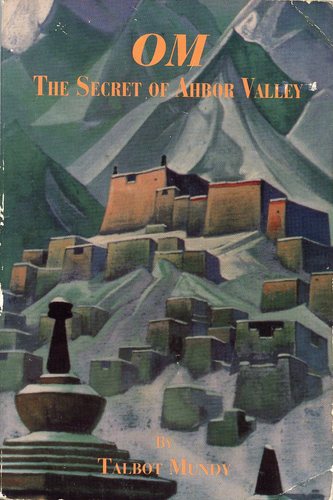 The subject matter had been written about by Talbot Mundy in his 1924 Om: The Secret of Ahbor Valley. Mundy moved to San Diego, California, in early 1922, and on New Year’s Day 1923 was admitted to Katherine Tingley’s Point Loma Theosophical Society. “It was there in late 1923, and early 1924 that Mundy began writing what many believe to be his finest novel, Om, the Secret of Ahbor Valley, while a guest at Tingley's private residence in the compound.”

Both novels feature the wisdom of aged lamas as part of the plot. The source of these stories in Blavatsky’s writings was looked at in our post from 2009.
Posted by Hari Hamsa at 7:18 PM No comments:


London’s New Statesman for December 12 looks at “The strange life of the creator of Mary Poppins,” P. L. Travers, whose career is the subject of a new film, Saving Mr Banks, with Emma Thompson portraying Travers and Tom Hanks taking the role of Walt Disney. The film focuses on the clash of their different visions for bringing Mary Poppins to the screen. P. L. Travers was the name taken by Australian born writer Helen Lyndon Goff (1899-1996). Goff travelled to Ireland 1925, met the poet George “Æ” Russell, and “Intoxicated by Irish myths and folklore, Travers joined in the Dublin literati’s embrace of eastern philosophy, theosophy, Madame Blavatsky and other gurus.”  She met the spiritual teacher George Gurdjieff, studied Zen in Japan, and “In the 1960s Travers gravitated, as Isherwood and Huxley had earlier, to Jiddu Krishnamurti.”

Travers is best known for Mary Poppins, the story of the quintessential English nanny published in London in 1934. The film that has occasioned the New Statesman piece, Saving Mr Banks, sees Walt Disney’s attempt to get the film rights for Travers’ book as a contest between entrepreneurship and rigid idealism. Travers’ concern was, as she later wrote, that “Magic conveyed in a book by words and the silence between words, inevitably, in a film, becomes trick.” The writer in the New Statesman, Valerie Grove, believes that for his 1964 movie adaptation, “Disney was right to excise from Mary Poppins the Zen mysticism and symbolism, about which academics had preposterously written lectures and learned papers.”

Is there anything Theosophical about Mary Poppins? John Algeo, Professor Emeritus of English in the University of Georgia who has written on Theosophy, thinks so, and his study Theosophy, Fantasy, and Mary Poppins, has just been made available as an e-book from Theosophy Forward.

H.P.B.’s friend, George Russell, said of the book: “Had [Mary Poppins] lived in another age, in the old times to which she certainly belongs, she would undoubtedly have had long golden tresses, a wreath of flowers in one hand, and perhaps a spear in the other. Her eyes would have been like the sea, her nose comely, and on her feet winged sandals. But, this age being the Kali Yuga, as the Hindus call it, . . . she comes in habiliments suited to it.”

Posted by Jaigurudeva at 7:57 PM No comments:

The Three Lives of a Hungarian General


“Zoltán Álgya-Pap was the only Hungarian general in the Second World War who received the coveted gold medal for extraordinary courage in face of enemy fire.” The December issue of Budapest’s The Hungarian Review carries an account of a relatively unknown Theosophist, Zoltán Álgya-Pap, who played an important part in translating and transcribing unpublished Blavatsky material held in the archives at the headquarters Theosophical Society at Adyar, India.

Born in Budapest in 1895, he enlisted in the Austro-Hungarian army at age of 19, moving up the ranks. In 1947 a Soviet court sentenced Álgya-Pap to 25 years of hard labour for commanding troops. In 1955 he was suddenly released and received political asylum in the Netherlands.

He met N. Sri Ram, president of the Theosophical Society, who invited him to serve as an archivist in the Society’s headquarters in Adyar, India, south of Madras now known as Chennai. His knowledge of languages came in handy, especially the Russian he picked up as a POW. Ram entrusted him to translate and systematise Blavatsky’s vast trove of notes and correspondence, much of it in her first two languages, Russian and German. Promoted as senior archivist, Álgya-Pap received kudos for his sensitive handling of the Blavatsky papers. He was also named to a key position in the theosophical hierarchy. His title was not communicated to non-members but it had to do with ceremony and magic that Madame Blavatsky summed up as “the seventh ray”.

Zoltán Álgya-Pap died in 1987, at age 92, in The Hague, the Netherlands, in an old-age home maintained by Theosophists. He had been a member of the Theosophical Society since 1936. Some of his work can be seen in the transcriptions from Blavatsky’s scrapbook in the first volume of the Blavatsky Collected Writings series.

Charles Fenyvesi, who met Zoltán Álgya-Pap in India in the 1960s, gives his story in “The Three Lives of a Hungarian General – He Received his Highest Honours from Mystic India,” which can be read here.


Victor Endersby in his 1969 study of Helena Pertrovna Blavatsky, The Hall of Magic Mirrors, saw Blavatsky as functioning as a “labyrinth of mirrors,” reflecting back in more or less distorted form the already existing impressions of those who attempted to explain her. The latest addition to H.P.B. biographies is Gordon Strong’s Lion of Light published by Axis Mundi books. Though the subtitle describes it as “the Spiritual Life of Madame Blavatsky,” not much of her inner life is revealed. Nor much on the sources that might have influenced her. The essay (a 133 pages with erratic footnotes and no index), which depicts Blavatsky in a favourable way, is peopled with much of the already known narrative. Gordon Strong, who has written on a number of New Age subjects, including on Merlin, the Arthurian legends, the Holy Grail, Stone Circles, Tarot, Magic and the Qabalah, has infused his subject with a number of contemporary concepts that were not in Blavatsky’s vocabulary. A litany of the various Masters supposedly associated with Blavatsky includes Sanctus Germanus (Saint Germain) whose incarnations included the biblical prophet Samuel, Plato, Joseph, Merlin, Roger Bacon, Francis Bacon (not the modern painter), and Christopher Columbus. Other tidbits include the revelation that “Blavatsky freely admitted to being addicted to the use of hashish at one time in her life.” In Mr. Strong's view, "Without Blavatsky, we should have no 'New Age'." One is not sure if this is to be considered a compliment. The book ends with four pages of astrological interpretation. Lion of Light sells for £9.99 in the UK, $16.95 in the U.S.

Posted by Jaigurudeva at 7:41 PM No comments: