*   The Jamaica Gleaner of Kingston, Jamaica, carries an extended look at the subject of reincarnation by Dr Glenville Ashby, “a social critic and president of Global Interfaith Council, NYC”. In Part 1, which appeared on May 25, he says of the subject:  “Interestingly, this doctrine has seeped into Western religious teachings, courtesy of Helena Petrova Blavatsky, who founded the Theosophical Society, after having spent many years in India.”

In Part 2, published June 1, he talks to a medium who lets him know: “And of Helena Blavatsky, the woman who single-handedly popularised reincarnation in the West, Ross says, ‘She has since communicated from the spirit world that she had erred in her belief in a fallacious doctrine.’” (!)


*   A Kindle edition of the Russian text of Vera Zhelihovskaya’s Truth About Helen Blavatsky is now available for those so interested. The text was initially published in the St. Petersburg paper Rebus in 1883 and deals with Blavatsky’s early life in Russia. An English translation in Mme. Blavatsky’s handwriting is in the archives at the international headquarters of the Theosophical Society, at Adyar, Chennai, India. Blavatsky’s translation was issued serially in The Theosophist, May to December 1991. Vera Zhelihovskaya was Blavatsky’s younger sister.


*   The blog of the British arts and culture magazine Aesthetica reviews The Strange City, an installation by Ilya and Emilia Kabakov at The Monumenta, Grand Palais, Paris:

Inspiration for this soaring colour-changing installation takes its roots from the theory of the Russian musician, Alexander Scriabin, who created a colour organ, “‪clavier à lumières”, appropriated the synesthetic system, and who was influenced by Newton’s Opticks and theosophical theories of Jean Delville and Helena Blavatsky.

Of the Soviet-born American conceptual artist, the piece notes:  “At the end of 1960s and beginning of 1970s he followed the interest in transcendental and irrational questions, Russian theosophy of 19th and 20th centuries. Moscow and Leningrad artistic communities were gripped by the thought of art as a medium of purely religious and philosophical ideas, and at that time Kabakov started his series of white paintings, where an artwork becomes a screen for transcendental light projection.”

So it comes as no surprise that among the spaces included are” Manas” and “The Centre of Cosmic Energy”. “Manas is a reconstruction of a mystical Tibetian city, existing, as artists suppose, on two levels – the mundane and the celestial, and surrounded by mountains, which makes communication with other worlds possible.” It will be on view from May 10 to June 22, 2014. 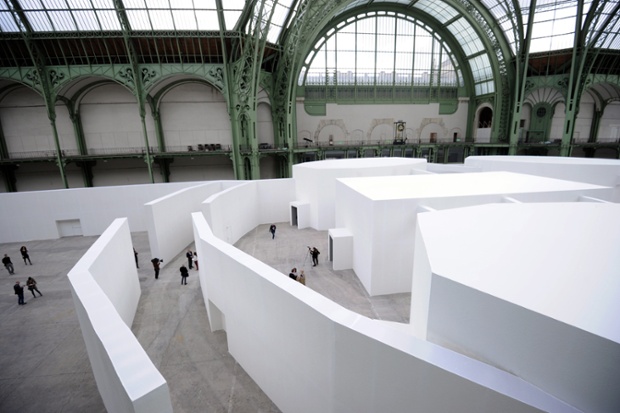 Posted by Jaigurudeva at 9:29 PM