Madame Blavatsky and the Birth of Indian Nationalism 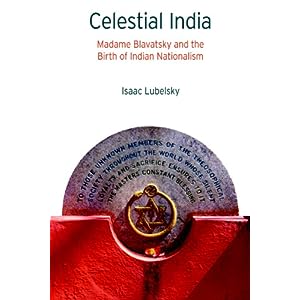 Equinox Publishing Ltd, an independent academic publisher based in London, will be releasing Isaac Lubelsky’s Celestial India: Madame Blavatsky and the Birth of Indian Nationalism next May. According to the product notes:

In 1917 Annie Besant (1847-1933), a white Englishwoman, was elected president of the Indian National Congress, the body which, under the guidance of Mohandas Gandhi (1869-1948), would later lead India to independence. Besant—in her earlier career an active atheist and a socialist journalist—was from 1907 till her death the president of the Theosophical Society, an international spiritual movement whose headquarters' location in Madras symbolized its belief in India as the world's spiritual heart. This book deals with the contribution of the Theosophical Society to the rise of Indian nationalism and seeks to restore it to its proper place in the history of ideas, both with regard to its spiritual doctrine and the sources on which it drew, as well as its role in giving rise to the New Age movement of the 20th century. The book is the first to show how 19th century Orientalist study dramatically affected the rise of the Theosophical ideology, and specifically demonstrate the impact of the work of the Anglo-German scholar, Friedrich Max Muller (1833-1900) on Mme Blavatsky (1831-1891), the founder of the Theosophical Society.

Isaac Lubelsky teaches New-Age thought at Tel Aviv University (the comparative Religion Program), and modern Indian history at Tel Aviv University and Haifa University (Departments of East Asian Studies). He is a research-fellow at the Stephen Roth Institute for the Study of Contemporary Anti-Semitism and Racism, Tel Aviv University, where he coordinates (since 2006) the Marriane and Ernest Pieper Research Seminar on worldwide Racism. His fields of research are diverse, and include the history of East/West encounters during the last three centuries, alongside the history of occultism, esotericism, and modern New-Age religions.

Annie Besant, and, of course, A.O. Hume are the names of Theosophists most associated with the rise of Indian nationalism, so it will be interesting see how well Lubelsky succeeds. In Indian portrayals, the sadistic British official is now a stock figure, as shown in the Tamil blockbuster released this year, Madrasapattinam, which takes place in Madras on the eve of Indian independence. The film opened and stayed at No.1 in Chennai box office charts for 3 weeks. Or 2005’s equally successful Mangal Pandey: The Rising (Indian title) or The Rising: Ballad of Mangal Pandey, based on the story of a Sepoy whose actions helped spark the Indian rebellion of 1857.