Constance Wilde and her son, Cyril, in 1889
Posted by Jaigurudeva at 2:47 PM No comments:

Esotericism of the iPhone 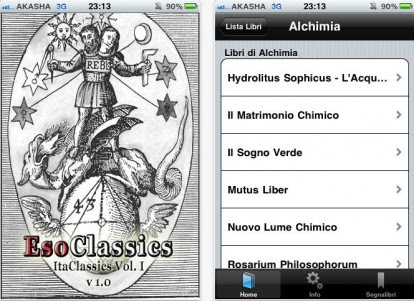 Posted by Jaigurudeva at 3:16 PM No comments:

It is the product of the creative editing of Walter Evans-Wentz, a Victorian Theosophist. His literary assembly owes as much to the doctrines of Madame Blavatsky as the purported author, Padmasambhava, the eight century Buddhist saint who is said to have buried a series of ‘treasures’ in the form of teachings to aid future, troubled generations...

Evans-Wentz was able to use the book to vest his version of Theosophy with all the authority of ancient wisdom, newly discovered. Interestingly, Lopez argues, the same pattern of scriptural recovery is manifest in Joseph Smith’s The Book of Mormon. So, although it is undoubtedly the combination of Tibetan esotericism and mortal anxiety that has led to the tremendous success of The Tibetan Book of the Dead, it is better placed within the American millenarian tradition that includes Theosophy, Mormonism and Spiritualism too.

Posted by Jaigurudeva at 4:42 PM No comments:

Investigating the Supernatural in France


Mme. Blavatsky and Theosophy get a brief mention in Sofie Lachapelle’s book,
Investigating the Supernatural: From Spiritism and Occultism to Psychical Research and Metapsychics in France, 1853–1931, published in April by John Hopkins University Press.

In 1875, the same year that [Eliphas] Lévi died, a new occultist movement building on this enthusiasm for things Eastern was created in New York when Helena Petrovna Blavatsky founded the Theosophical Society with the help of lawyer and journalist Henry Steel Olcott. Theosophy consisted of a set of mystical teachings inspired by esoteric traditions of the East. In its aims, the Theosophical Society demarcated itself from other occult groups by its discussion of universal fraternity and its focus on a set of Aryan and Eastern teachings.

While noting that “Theosophy was never as popular in France as in the Anglo-Saxon world, but it introduced many to occultist traditions and functioned as a catalyst to the larger movement,” the author says, “For most of the 1880s, the occultist revival taking a hold of France centered on the Theosophical doctrine.” Le Lotus Bleu, the theosophical journal started in 1890 in France, did not, as the author claims, survive until 1986, but is still published.

Posted by Jaigurudeva at 5:49 PM No comments:


The July/August issue of The Atlantic magazine contains an examination of Gandhi’s image by Christopher Hitchens, using Joseph Lelyveld’s recent study of Gandhi’s life, Great Soul: Mahatma Gandhi and His Struggle With India (mentioned in a March 27 Blavatsky News post), for his template.

The word Mahatma (often employed in ordinary journalistic usage without any definite article, as if it were Mohandas Gandhi’s first name) is actually the Sanskrit word for “Great Soul.” It is a religio-spiritual honorific, to be assumed or awarded only by acclaim, and it achieved most of its currency in the West by association with Madame Blavatsky’s somewhat risible “Theosophy” movement, forerunner of many American and European tendencies to be found in writers, as discrepant as Annie Besant and T. S. Eliot, who nurture themselves on the supposedly holy character of the subcontinent.

Hitchens has taken on the claims of a number of prominent individuals over the years, including Mother Theresa. The rest of his comments can be read here.

Posted by Hari Hamsa at 3:27 PM No comments:

Blavatsky, Landscape Painting and The Forest


Dainis Dauksta in his contribution, “Landscape Painting and The Forest—The Influence of Cultural Factors in the Depiction of Trees and Forests,” in the volume New Perspectives on People and Forests edited by him and Eva Ritter (Springer, May 2011) looks at “two twentieth century painters [who] worked extensively, although not exclusively, on images of trees throughout their lives,” and who shared an interest in the ideas of H.P. Blavatsky. “They left in their work progressive series of compositions whereby their developing philosophies can be tracked through the changes in their imagery.”

Writing of Mondrian, Dauksta says: “He was searching for an entry to the world of spirit rather than of surfaces, and in 1909 he joined the Theosophical Society founded by Russian psychic Helena Blavatsky in 1875. This group had as its mission three objects: first to form a nucleus of the universal brotherhood of humanity, second to encourage the comparative study of religion, philosophy and science, and third to investigate the unexplained laws of nature and the powers latent in human beings. His work became saturated with spiritual metaphor.” The book—267 pages, hardcover—was published by the German conglomerate Springer in May and sells for $189.00 U.S.

Posted by Jaigurudeva at 4:26 PM No comments:


For over thirty years David Reigle has been contributing to the growing understanding of Mme. Blavatsky. His researches into Sanskrit and Tibetan sources have been utilized by many. So, whatever he has to say on the subject is of interest. The following is a June 6, 2011 post of his commenting on the post on a theosophical website:

I have as much respect for HPB as anyone, but if we are to speak about truth and illusion in Theosophical literature, it may be best to start with truth and illusion in HPB’s own writings. Her writings are full of errors. A large number of these are the errors of writers of her time, whom she copied. For example, in your previous posting, “Masters and the Movement,” this sentence is found:

“The lines above seem to contain key information as to contacts between Masters and the movement after the year 1900. This is the year when the Aquarius Age began, according to a clear and documented statement made by H.P. Blavatsky (‘Collected Writings’, TPH, volume VIII, p. 174, fn).”

For many years, I, too, took the above-referenced statement of HPB’s as giving the correct starting year of the Aquarian age, thinking that it came from the direct knowledge of her Mahatma sources. But then I found it in one of Gerald Massey's large books that HPB had reviewed. She had copied it from there almost verbatim.

It now becomes very questionable whether her teachers actually endorsed this date. When we see this type of thing happening again and again, I must conclude that large amounts of what are regarded as HPB’s own views are in fact just the views of other writers of her time that she copied. The mere fact of her repeating what was then taken as fact does not necessarily endorse its accuracy. Many, many of these can today be shown to be errors.

It would not be fair to attribute these errors that she copied from others to her. Everyone of her time necessarily did the same thing. Any book from 1888 can be shown to be full of such errors. Our task should first be to sort out truth and illusion in HPB’s own writings. We need to sort out what she merely copied from others, and what she actually put forth as truth. After all, she never claimed omniscience, but repeatedly denied it. She was the first to say that her own books are full of such errors (see her article written shortly before her death, “My Books”).

Posted by Jaigurudeva at 4:05 PM No comments:

Blavatsky in the Board Room


Transparency International Sri Lanka (TISL) is a National Chapter of Transparency International (TI), a leading global movement against corruption. Their website posts a presentation given at the Organization of Professional Associations of Sri Lanka (OPA) Seminar on Buddhism and Business Management held in Colombo in May in connection with the 2600th Sambuddhathva Jayanthi. The piece “Buddhism in the Board Room” by Chandra Jayaratne, former Ceylon Chamber of Commerce Chairman, adds a novel touch amid calls for good governance:

Russian esotericist Helena Petrova Blavatsky (1831-1891), best known as the founder of the modern Theosophical Movement, who in partnership with Colonel Henry Steel Olcott set the foundations for Buddhist revival in Sri Lanka through the promotion of education and Buddhist values, initiated a movement based upon “teachings” and “techniques” claimed to have received from real acquaintances whom she called “Masters” or Mahatmas. The “Masters” comprised of other esotericists who acted as humanists committed to global good governance, were willing to be guides, gurus and advocates and even whistle blowers where and whenever required.

The rest of the presentation can be read here.