The Allen Ginsberg Project posts a talk by the American poet Allen Ginsberg, August 8, 1976, delineating the lineage that lead to the formation of the Naropa Institute (now Naropa University) in Boulder, Colorado:

back in the early and late (19)50’s and early  (19)60’s, many of us were experimenting with meditation, with or without teachers, (but mostly without teachers) and so exploring our own consciousness, taking peyote (as many still do – in this city tonight, in fact), working with LSD, and reading The Tibetan Book of the Dead, reading the Evans-Wentz documents, and attempting to interpret them in isolation, like the old famous American isolatos of literature as portrayed by Thomas Wolfe and Sherwood Anderson and Vachel Lindsay, all the Swedenborgian mystics from small towns in Illinois, who had to explore on their own, with defective means and defective equipment, whatever they could get, through Theosophy, through Madame Blavatsky, through Timothy Leary, through Allen Ginsberg, through Beatniks, through home-made yogis, through American Indians. So there was a spiritual search, which I think was quite genuine, and in a sense has brought us all here together tonight finally, with many brothers and sisters all over the country. But what is great that’s happened here over the last few years is.. has.. it’s finally been.. like re-inforcements arrived from Tibet.

Posted by Hari Hamsa at 8:11 PM No comments:


The University of Hong Kong University Press has published an intimate study of the impact of Chinese art on the Swedish critic Osvald Sirén (1879-1966), one of the pioneers of Chinese art scholarship in the West. The book, Enchanted by Lohans: Osvald Sirén’s Journey into Chinese Art by Minna Törmä, features a number of photographs from his visit to China. (Lohans, Buddhist adepts, protectors of the teachings, were noted subjects in Chinese iconography.)

Sirén made four voyages to East Asia: 1918, 1921–1923, 1929–1930 and 1935. He spent most of his time during these travels in China and Japan, but he visited Korea as well. In general, the period from ca. 1900–late 1930’s was an intense period of reseach and travel in China and many of the Western collections of Chinese art were formed at this time. It was also a time when archaeological excavations began in a systematic fashion in China. Sirén, among several other western scholars or dealers, was involved in this process. The growing market for ancient grave goods, especially, promoted widespread interest in China’s ancient arts and created new collectors.


Dr. Törmä, author of a number of other studies on Sirén, is Lecturer/Tutor of Chinese Art at Christie’s Education (London) and Adjunct Professor of Art History at University of Helsinki.

She acknowledges that “Theosophy played such an important part of Sirén’s life,” although cautioning against generalizations. He became involved with the Swedish Section of Katherine Tingley’s Theosophical Society based in Point Loma, California, which claimed to carry on Blavatsky's work. “Sirén saw the role of Theosophy as practical; a Theosophist ought to bring instruction, support and comfort in people’s daily lives. This would partly be realized by transmitting knowledge about ancient beliefs to the West and about the religions and philosophies born in the East; the goal was also to teach everyone to find the source of knowledge inside themselves.”

Dr. Törmä’s paper “In Search of Images of Religious Purity: Osvald Sirén and the Allure of Chinese Art” (delivered at the Enchanting Modernity: Theosophy and the Arts in the Making of Early Twentieth-Century Culture Conference at Liverpool Hope University in December 2010)  looked at the way theosophy played a role in Sirén’s professional and personal life.

He was internationally known historian of Italian painting and pioneering scholar of Chinese art in the West; he was institutionally placed in Stockholm, first as Professor of Art History in the University of Stockholm (1908–1923) and then as curator of the Department of Painting and Sculpture in the Nationalmuseum (1926–1944).

Theosophy played an important role in Sirén’s life, it was the basis of his world view, and he had published articles on various topics in Swedish journal Theosophia since 1900, then in 1912 appeared his first article in the English periodical The Theosophical Path, after he had visited Point Loma in California, the Theosophical Headquarters and Katherine Tingley (1847–1929), in 1911. 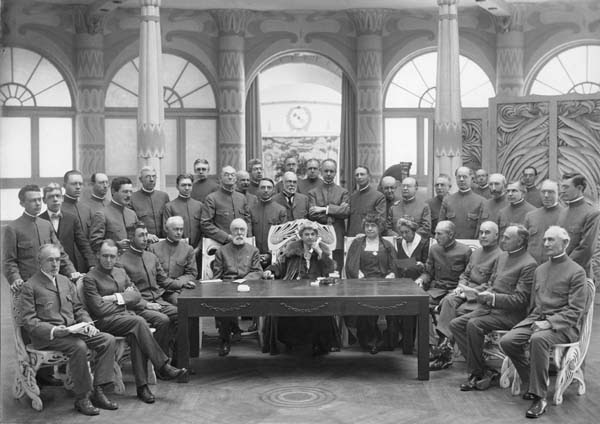 Parliament of Peace Committe, Temple of Peace, Point Loma, California, 1923.
Osvald Sirén stands fifth from the left. Katherine Tingley is seated at the center
with Gottfried de Purucker, arms folded, standing behind her.


Blavatsky’s name appears in a number of recent titles:

*  Luke Ferretter’s new book, The Glyph and the Gramophone: D.H. Lawrence’s Religion, goes into some detail about the impact of Blavatsky’s ideas on the writing of D.H. Lawrence. It is published by Bloomsbury as part of their New Directions in Religion & Literature series. Ferretter quotes a letter from Lawrence to correspondent where he writes: “Have you read Blavatsky’s Secret Doctrine? In many ways a bore, and not quite real. Yet one can glean a marvelous lot from it, enlarge the understanding immensely.”


*  Clive Bloom’s Victoria's Madmen: Revolution and Alienation recognizes some of the disparate voices and their resulting anti-establishment stances during the nineteenth century. It features a chapter on Annie Besant and the influence of Blavatsky and Theosophy on her career. It is published by Palgrave Macmillan.

*  Mary Claire Vandenburg’s MA thesis at Queen’s University, Kingston, Ontario, Canada, “Occultism in Robertson Davies’s The Deptford Trilogy” contains a chapter on the interplay of Theosophy in the works of Canadian writer Robertson Davies. A  stamp commemorating Davis was issued in Canada on August 28 honoring his hundredth birthday.


*  Mitch Horowitz looks at How the Occult Brought Cremation to America in the Huffington Post, crediting it to Baron de Palm’s cremation organized by Olcott and the theosophists in 1876. “While New York's "pagan funeral" is long forgotten, cremations today account for about 40 percent of all American passages. This represents just one way in which ideas introduced by occult movements have transformed American life -- and death.”

Posted by Jaigurudeva at 7:15 PM No comments:


Art & Antiques Magazine for August 2013 carries a piece on the impact of Blavatsky’s Theosophy on the Transcendental Painting Group that flourished in Santa Fe, New Mexico, in the 1930s and ‘40s. Leading lights and founders of the TPG were Emil Bisttram, a transplant from New York City, and Raymond Jonson. “The pictures they were making were completely abstract or mostly abstract, in the 'non-objective’ vein espoused by Wassily Kandinsky, who was a huge influence on them all.”

One ingredient in that mix was a lively interest in the occult, and particularly in Theosophy, a movement founded in the late 19th century by a Russian writer and mystic, Helena Petrovna Blavatsky. Theosophy, while absorbing and synthesizing a variety of ideas from European and Eastern mysticism and symbolic lore, emphasized the right of the individual to choose his or her own path to truth irrespective of dogma and tradition. This openness combined with speculative boldness naturally appealed to creative artists, prominent among them Blavatsky’s fellow-Russian Kandinsky. Another Russian, the painter and peace activist Nicholas Roerich, was also strongly influenced by Theosophy (as well as Buddhism) and had a presence in New Mexico. He visited Santa Fe in 1921, and in the ’30s a gallery based on his philosophical ideas was set up and served as a gathering place for the TPG.

Other members included Lawren Harris, the Canadian Theosophist who had been a member of the Group of Seven that inaugurated modernism in Canada. “In their day, the Transcendental painters were well respected in the art world, despite their peripheral position, geographically speaking. They exhibited at the 1939 World’s Fair in New York and also at the Museum of Non-Objective Painting (later renamed the Guggenheim) in 1940. However, while the artists had long careers, their official solidarity as a group lasted only until 1942, when war duties and pressures caused them
to  disperse.”

The rest of the article, “Mystic Vistas: The Transcendental Painting Group  aimed to convey spiritual truths through abstract art,” can be read here.

Posted by Hari Hamsa at 8:49 PM No comments: