The Los Angeles Neighborhoods and Real Estate guide, Curbed LA, looks at “The Creation of Beachwood Canyon’s Theosophist ‘Dreamland’” that lasted from 1912 to 1924 when the community moved to Ojai, California, where they still reside.

The Theosophists were dreamers. “Theosophy, in its abstract meaning, is Divine Wisdom,” wrote movement founder Helena P. Blavatsky, who claimed to be a “missionary of ancient knowledge.” The Society soon became popular with educated, middle-to-upper class freethinkers in Europe, America, and India.

Established in the Hollywood Hills as Krotona, “the community grew quickly along more haphazard lines, with architecture reflecting the Theosophist's ‘Eastern’ inclinations.” The rest of the piece covers examples of the architectural styles that have survived. With the departure of the group, “Most of the buildings at Krotona were quickly converted into apartments or continued on as private homes, and many still stand today, in various stages of repair. Crammed between the mish-mash of later Beachwood Canyon development, they still delight the eye and seem to be just a bit out of place.”

The history of the Krotona Theosophists has been devotedly chronicled in the volumes of Joseph Ross on the subject.


*  A post at The Smart Set blog at Drexel University reminds us of the upcoming 100 anniversary of the birth of the American musician known as Sun Ra, born Herman Poole Blount on May 22, 1914.

Sun Ra believed that the whole of humanity was in need of waking up. He wanted to slough off old ideas and habits, brush off sleepy clothing and shake off drowsy food. Because present time mattered little to Sun Ra, they say he rarely slept. Even as a child, he would spend all his time playing the piano or composing. “I loved music beyond the state of liking it,” he once said. Sun Ra was just as obsessed with books — you couldn’t see the walls of his room for the books. Books contained words and the words held a secret code that, if unraveled, revealed truths about human existence. He read the ancient texts of Egyptians, Africans, Greeks, the works of Madame Helena P. Blavatsky (with whom he once shared the initials H.P.B), Rudolph Steiner, P.D. Ouspensky, James Joyce, C.F. Volney, Booker T. Washington. He read about the lost history of the American Negro and studied the origins of language. Sun Ra knew Biblical scripture better than any preacher, read Kabbalah concepts and Rosicrucian manifestos. Through these texts Sun Ra learned it was possible for the chaos of human knowledge to be ordered. Theosophy, relativity, mathematics, physics, history, music, magic, science fiction, Egyptology, technology — all were keys to a unified existence. Ideas and music carried a reclusive black boy from Birmingham and transported him into outer space. But the most important idea Sun Ra learned from all his reading, from all the knowledge he acquired, is how puny knowledge is in the face of the unknown. We need the unknown, Sun Ra said, in order to survive.


*  Dr. Christopher Scheer will address the impact of Theosophy on developments in modern art and music. "Founded in New York City in 1875 by a group that included the mystic Helena Blavatsky, the Theosophical Society united Western esoteric thought with Eastern philosophical and religious ideas in an attempt to understand the mysteries of the universe.” The event “Art History: Enchanted Modernities-Theosophical Thought in the History of 20th century Art and Music” will be held Thursday, June 12, 5:30 pm at the Sun Valley Center for the Arts, Ketchum, the oldest arts organization in Idaho’s Wood River Valley.

Posted by Hari Hamsa at 7:50 PM No comments:


*  The Theosophy Company of Los Angeles has announced the publication of The Secret Doctrine Dialogues, “taken from the same stenographic notes as The Transactions of the Blavatsky Lodge.” This is essentially a reprint of the material published in 2010 as The Secret Doctrine Commentaries by the I.S.I.S. Foundation in The Hague but at a cheaper price: $35.00. Some typographical errors have been corrected and a new index added. All the careful Sanskrit transcription in the 2010 edition has been replaced by a mélange of dated 19th century terms, such as Parabrahm instead of Parabrahman, etc. Why Theosophists continue with such usage which makes their writings seem even more dated is beyond us. For those who want the original it is available online free from the publisher in The Hague here.

Unfortunately neither of these books will do much to make Blavatsky more accepted by the general public as the material contained in them is of a nature not to make easy reading. Specialists, no doubt, will be thrilled. 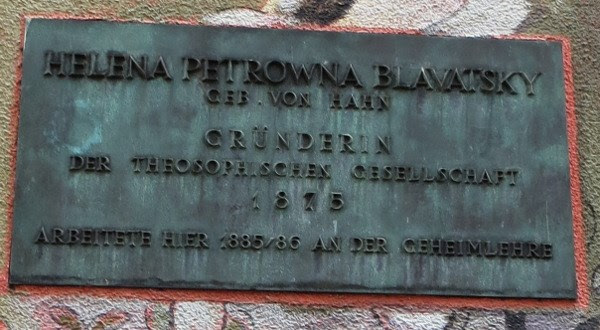 Plaque on the building in Würzburg, Germany, where Helena Petrovna Blavatsky
once resided when writing The Secret Doctrine.