Tunnels of the Inca: As Tall as a Man, and Hundreds of Miles Long


The following information comes from Brien Foerster, who is now in Peru:

A tunnel measuring 2 km in length, linking the Koricancha temple with the fortress of Sacsayhuaman, located on the outskirts of the Peruvian city of Cuzco, was discovered by Spanish archaeologist Anselm Pi Rambla, in the ancient Inca capital. The tunnel may form part of a series of galleries, chambers, fountains and ancient mausoleums which are probably under the city of Cuzco, according to measurements made by Pi Rambla as part of the Wiracocha Project, initiated in August 2000.

When Mme. Blavatsky, famous 19th century European “medium” visited Peru, she viewed and concurred with the information regarding the markings on the Ila monolith. She also asserted that information regarding the entrances to the tunnels had been graven in the walls of the “Sun Temple” (Qoricancha) at Cuzco. It is reported that Mme. Blavatsky received a chart of the tunnels, from an old Indian, when she visited Lima. This chart now reposes in the Adyar, India, archives of the Theosophical Society.

In volume 1 of Isis Unveiled, pp. 595-98, HPB makes reference to such a tunnel, and says: We have in our possession an accurate plan of the tunnel, the sepulchre and the doors, given to us at the time by the old Peruvian, and there does exist in the TS Archives at Adyar, a three page document showing a number of coastal towns along what was then Bolivia and Peru, which is reproduced in the Theosophical Publishing House edition of Isis Unveiled and in vol. 2 of the Blavatsky Collected Writings series, pp. 339-43, attached to her article “A Land of Mystery.” 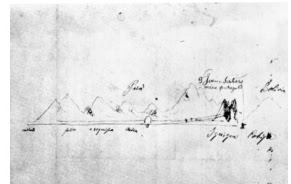 As she wrote in that article: Strong corroborative evidence is now found in more than one recent scientific work; and the statement may be less pooh-poohed now than it was then.

The rest of Brien Foerster’s post can be read here, and the work of Anselm Pi Rambla, here.