BBC Radio 3 will be devoting a program on Saturday, August 21, 2010, at 12:15 GMT to “the extraordinary music and story of the Russian composer, pianist, mystic and philosopher,” Alexander Scriabin (1872-1915). It will be hosted by Peggy Reynolds, a regular broadcaster on arts and music for BBC Radio, who is Reader in English at Queen Mary, University of London. She was also the host for “Travels with Blavatsky,” which was broadcast on BBC Radio 3 in December 2004, the first such program to be devoted to Blavatsky on BBC Radio.

The program description for “Scriabin—A Life in Colour” is as follows:

At the turn of the twentieth century this remarkable figure's music and ideals challenged the very nature of individual and musical expression. His compositional technique and style evolved extraordinarily during of his life - his early piano pieces, reflecting his adoration of Chopin, are romantic and fresh while his later compositions explore new reaches and innovations in harmony. His ten piano sonatas are staples of the piano repertoire, and his miniature piano pieces are considered masterpieces of 20th century pianism. Scriabin loved to discuss philosophy and became enthralled by the theosophy movement of Madame Blavatsky. He was convinced that he was destined to produce an all-consuming work of art - an apocalyptic work of cosmic proportions which would transfigure mankind and its universe. The unrealised Mysterium (Final Mystery) would embrace music, sound; colour and light; dance; fires, incense, perfumes; tastes, pain and other tactile experiences. Scriabin's works from 1902 until his death in1914 were all influenced by this vision. His orchestra works include the Divine Poem (1903), the Poem of Ecstasy (1907), and the Poem of Fire or Prometheus (1909) a multi-sensory work for which Scriabin orchestrated a part for colour keyboard which was to project a constantly evolving stream of colours as the visuals to the sonic portion of the score.

Definitely ahead of his time. The influence of Blavatsky on Scriabin is an area that deserves further study, especially in relation to the correlation of colour and sound that they both shared. An example of Scriabin’s key-color association can be seen here. 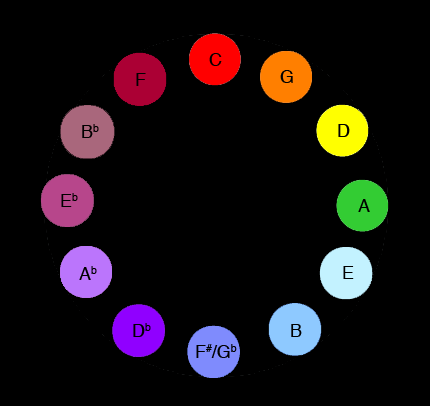 Posted by Jaigurudeva at 4:41 PM