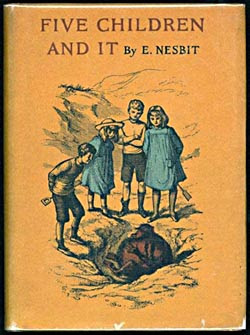 The English children’s writer Edith Nesbit is the subject of an extensive biographical sketch by Leslie Evans in a Nov. 1st post at the Boryana books website. Referring to Julia Briggs’ 1987 biography A Woman of Passion: The Life of E. Nesbit, 1858-1924, Evans says: “Briggs quotes a March 1884 letter from Edith to Ada Breakell listing several books she is reading. These include, Edith writes, ‘an intensely interesting book which Harry [her brother, married to Ada Breakell] would like called Esoteric Buddhism by Sinnett.’”

A. P. Sinnett was a recently converted disciple of the Russian mystic Madame Helena Petrovna Blavatsky, the founder of the occult Theosophical Society. Sinnett’s book had little to do with any recognized school of Buddhism but was devoted to Blavatsky’s schema of world evolution from the mythical continents of Lemuria and Atlantis, and the teachings of her claimed Mahatmas or Ascended Masters of Tibet, essentially all-wise spirit guides who live on the Astral Plane and from there influence the course of human history. Sinnett was the recipient of a series of alleged letters from the Mahatmas, the question of their authenticity raising a heated controversy even in circles sympathetic to the idea of spirit communication.

Now Blavatsky’s Mahatmas are “Ascended Masters of Tibet, essentially all-wise spirit guides who live on the Astral Plane and from there influence the course of human history” !