Blavatsky and the Atheist 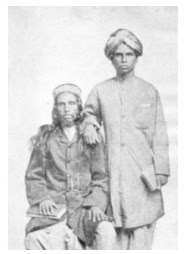 Initially, R. Jagannathiah had joined the National Secular Society of London and was elected its Vice President along with Annie Besant. “In 1882 he argued the tenets of Theosophy with Helena Blavatsky on a public platform. By the end of the week-long debate, he turned a believer of Theosophy,” informs Kalpana. R. Jagannathiah was also the founder of the Bellary Sanmarga Lodge and was associated with Adyar Theosophical Society. Getting the chronology of events right was important, his personal journals and correspondence which have been preserved helped in the process. “His correspondence with the founders of the Theosophical Society like Helena Blavatsky and H.S Olcott is well documented and sources of information. Gathering all the facts and cross referencing them took a lot of time,” explains Kalpana.

Jagannathiah, who wrote as“R.J.” and “Veritas” in The Philosophic Inquirer of Madras, was introduced to Blavatsky on December 27th, 1882. They spent three days in discussion and he says, “In three days she shattered my seven years’ knowledge of atheistic theories.” He became an ardent worker for Theosophy in India. He penned a memorandum about her in 1909, which can be read here. A biographical sketch, with the picture of him seated with his co-worker, T.S. Swaminatha Aiyar, is in the New York Path of December 1894.