If a picture is worth a thousand words, then

* The house where Blavatsky was born, now a museum, as it looks in winter. Photo taken in Kirovs’kyi district, Dnipropetrovs’k, Dnipropetrovs’ka oblast, Ukraine. Before 1926 the town, still part of Russia, was called in Yekaterinoslav. The image comes from the photographer shotov; other examples of his work can be seen here.

* Blavatsky’s cremation urn as it looks today. The photograph was taken during the recent December 2012 Convention at the International Headquarters of the Theosophical Society at Adyar, India. The brass exterior has changed colour with age. The dome lifts up and would have contained her ashes. Thanks to the theosophical discussion site, Theos-talk, which brought it to our attention. Previous information about the ashes and the urn is given by us here. 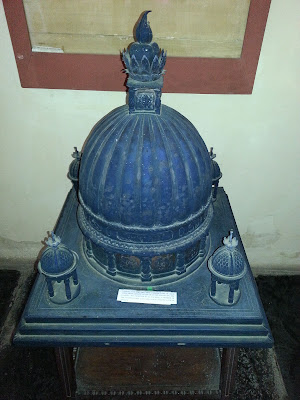