In the Shadow of the Enlightenment 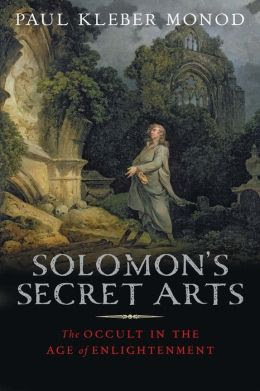 In Blavatsky’s view of esoteric history the modern Theosophical movement was the latest manifestation of previous recurring cycles. The influence of Freemasonry on eighteenth century mores has been well-documented. Enigmatic figures like Saint-Germain, Cagliostro, and Mesmer have also received new studies. Paul Monod’s Solomon's Secret Arts: The Occult in the Age of Enlightenment (Yale University Press, 2013) gives credence to a number of lesser figures who formed this pre-theosophical current. Characters range from Thomas Vaughan to Elias Ashmole, from Sigismund Bacstrom, who claimed Rosicrucian initiation as late as 1794, to the astrologer Ebenezer Sibly; even Thomas Taylor, the translator of Plato, makes an appearance. Monod, a professor of history, charts his area of study for the reader:

The winding, muddy and often submerged paths of occult thinking in the eighteenth century may not be as familiar to British historians as its more visible public byways in the late seventeenth century, but they were well travelled nonetheless. Adherents of the occult kept up a lively interaction with conventional intellectual trends, reconfiguring Hermeticism and Neoplatonism to suit the age of steam engines and revolutionary politics. As in the past, they eagerly absorbed heterodox religious ideas and maintained a keen interest in popular magic. Far from seeking to undermine the Enlightenment, they wanted to be a part of it, which should cause us to question just how far the boundaries of “thinking for oneself” might extend. Yet occult thinkers continued to lack respectability and remained vulnerable to attacks by those in authority, as well as to the vagaries of public opinion.

The reaction to the French Revolution in the 1790s proved devastating to them, because they were now associated with dangerous political ideas. But the attempt to stamp them out was not successful, and they survived long beyond the end point of this book. When the guardians of the temple of British intellectual orthodoxy, founded on the cultural values of the educated Anglican elite, reluctantly began to make room for other points of view in the course of the nineteenth century, the denizens of occult philosophy were still swarming in the shadows, perhaps more numerous than ever. They emerged into the daylight after 1875, calling themselves Theosophists, Spiritualists, Hermeticists, Rosicrucians, Druids, Wiccans, Knights of the Golden Dawn, all lending their voices to the cacophonous yet vibrant disharmony of British public culture.

This area will be revisited again with the publication of John V. Fleming’s The Dark Side of the Enlightenment: Wizards, Alchemists, and Spiritual Seekers in the Age of Reason, scheduled for release next month, which will bolster Monod’s contention.

Posted by Jaigurudeva at 6:34 PM