Blavatsky, Buddhism and the Movies


The representation of Buddhism in movies is the subject of Ronald Green’s book Buddhism Goes to the Movies: Introduction to Buddhist Thought and Practice recently published by Routledge. Different aspects of Buddhism are illustrated through the content of the movies chosen. The book also supplies a selected list of films with Buddhist content. Helena Blavatsky is acknowledged as a source of influence in the chapter that deals with the 1919 silent film Broken Blossoms and Lost Horizon, 1937.

Lost Horizon, adapted from James Hilton's best-selling 1933 novel by that name, centers around Shangri-la, likely a literary adaptation of the mythical kingdom of Shambhala in Tibetan Buddhism. Madame Blavatsky of the Theosophical Society had earlier claimed that her undisclosed Tibetan Lama teacher had shown here the secret location of Shambhala. Similar to It’s a Wonderful Life [also produced by Frank Capra], Lost Horizon is about the search for what is really important in life. 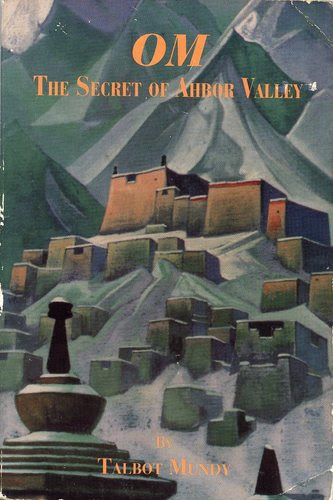 The subject matter had been written about by Talbot Mundy in his 1924 Om: The Secret of Ahbor Valley. Mundy moved to San Diego, California, in early 1922, and on New Year’s Day 1923 was admitted to Katherine Tingley’s Point Loma Theosophical Society. “It was there in late 1923, and early 1924 that Mundy began writing what many believe to be his finest novel, Om, the Secret of Ahbor Valley, while a guest at Tingley's private residence in the compound.”

Both novels feature the wisdom of aged lamas as part of the plot. The source of these stories in Blavatsky’s writings was looked at in our post from 2009.
Posted by Hari Hamsa at 7:18 PM