The Daily News from Colombo, Sri Lanka, for February 18, 2010, commemorating Olcott Day (February 17—the day of his passing) carries an article by C.V. Agarwal about Col. Olcott that mentions HPB. Dr. Agarwal, a former General Secretary of the Theosophical Society in India, who died at the Society’s international headquarters at Adyar, Chennai, India, last summer, worked to bring about a greater interaction between the Theosophical and Buddhist movements in India and Sri Lanka. The article had been published previously in the Daily News and was reprinted in part as recognition of his work. His article can be read here. 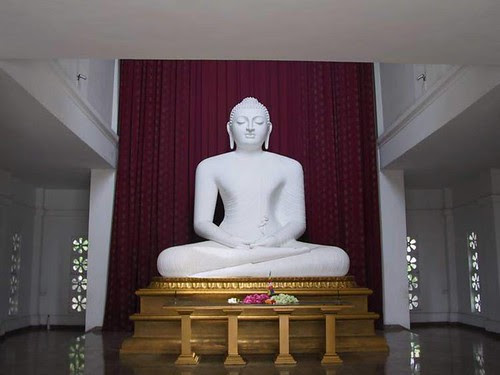 Rather than illustrate this piece with a photo of Olcott or even the stamp issued by Ceylon in 1967 to commemorate the sixtieth anniversary of his passing, this picture of the Ananda Viharaya at Ananda College in Colombo serves as a better fit. In 1886 Olcott founded the school that became Ananda College, and it has gone on to become one of the leading Buddhist colleges in South Asia, providing a number of Sri Lankan members of Parliament, journalists, and cricketers! The Viharaya at the College opened in 1969 and recently completed renovations in time for its fortieth anniversary.