How Others See Us


The Observer newspaper of London for Sunday, June 6, 2010, looks at the exhibition, “Newspeak: British Art Now,” that has arrived at the Saatchi Gallery there. Blavatsky News carried an account of its showing at the Hermitage in St. Petersburg earlier this year. The reviewer, Sean O’Hagan, asks:

One cannot help but wonder at shows like this what will become the signature work – the Dead Dad or Myra of the Newspeak generation. That tainted honour might fall to Goshka Macuga's Madame Blavatsky or littlewhitehead's It Happened in the Corner. The first is a sculpture of the famous 19th-century aristocrat and theosophist suspended between two chairs, as if levitating in a hypnotic trance. It speaks of death, mysticism and illusion, not to mention charlatanism, and is compelling perhaps because we live in a supposedly post-rational age where the pseudo-spiritual blatherings of Blavatsky and her followers retain an attraction for the impressionable and the anti-scientific. It also seems oddly holy.

The rest of the review can be read here. 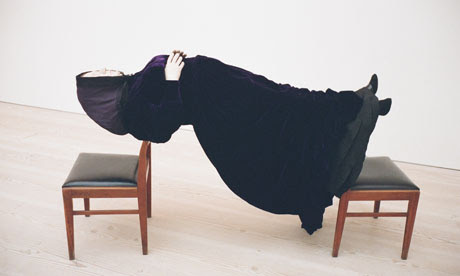 Posted by Jaigurudeva at 7:37 PM